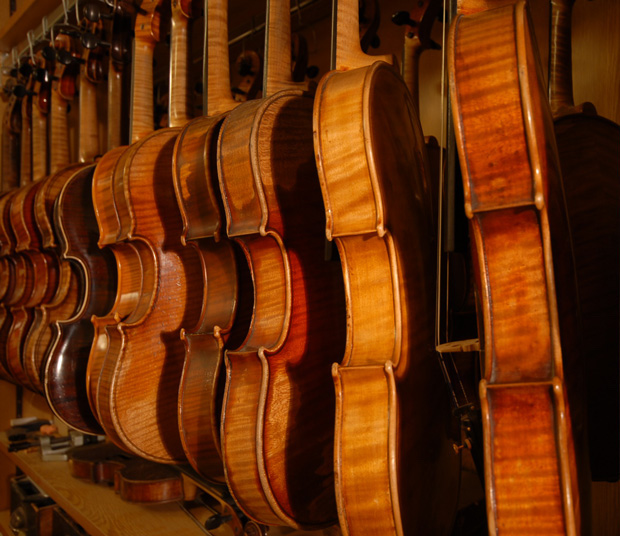 Born in Vienna, on the 12th of Juli 1962, as son of violinmaker Gerhard Neubauer my career path was already predefined.

After attending a business education for three years, I started my apprenticeship in the Viennese workshop of violinmaker Anton Jirowsky III. in 1980.

In 1984 my time as a journeyman started in the workshop of my father, violinmaker Gerhard Neubauer, which prepared me for the successful completion of the Viennese examination for master craftsman's diploma in 1989.

Afterwards I was employed as the general manager of my father's shop, responsible for the workshop and account management.

Since July 1997 I have taken over the traditional Viennese workshop of my former apprenticeship-master, violinmaker Anton Jirowsky III., located in Vienna, Lothringerstraße 11, as a self-employed violinmaker.

The Viennese Zach & Jirowsky School since 1870

As the successor of A. Jirowsky III. and his Viennese master workshop that has existed for over three generations, it is particularly important to me to continue the long tradition of the Viennese Zach & Jirowsky School. I would like to introduce the masters of this school below.

Anton Jirowsky III., son of A. Jirowsky II., born on August 27, 1937 in Vienna was an apprentice of Hans Jirowksy and Adolf Stübiger. In 1958 he took over the workshop from his mother, who, after the death of his father, continued it with Adolf Stübiger as general manager.

Inspired by Stradivari and Guarneri, he built about 50 string instruments, including several violas and two cellos, often with orange-brown oil varnish. His work in new buildings and repairs, as well as being an officially appointed expert for old stringed instruments, was greatly appreciated by colleagues and customers at home and abroad.

The son of A. Jirowsky I., born on April 29, 1904 in Vienna, worked as an apprentice and journeyman in his father's workshop. After the death of his father, he continued the workshop until his own death in 1951.

He continued to build his instruments according to the Stradivari and Guarneri models, influenced by the Zach School with dark red and orange-brown oil paints. He built about 30 violins and several guitars.

He built his instruments mainly inspired by Stradivari models, which were mostly varnished reddish brown, often showed black painted snail edges and impressed by a very good wood quality. In addition, he made numerous guitars and was valued as a repairer. He also participated in many exhibitions, where he received several medals. A. Jirowsky I. built about 300 violins, 20 violas and 10 cellos.

Son of Thomas Zach, born March 30, 1859 in Budapest. From 1872 to 1874 he attended the conservatory (major in violin) in Vienna. Where he did his apprenticeship as a violinmaker is not known. He was a companion in his father's business until 1887 and continued to do so on his own account from 1888. The business initially had a very good reputation and fairly large sales. Carl Zach had the title of a royal Greek court supplier and founded a limited partnership in 1897 that was to exploit two of his inventions. However, the founding of the company, together with his lavish lifestyle, deprived him of all his assets the following year. After stays in Brussels in 1902 and other European cities as a bar violinist, his further life up until his death in London in 1918 is unknown.

He built his instruments mainly inspired by Stradivari models with relatively flat curvatures and orange-brown to reddish-brown varnish. The snails are often black edged. He owes his great name recognition to his carved portrait snails, which can still be admired in the collection of old musical instruments of the Kunsthistorisches Museum Vienna.

In 1884 he honored the brothers Hans and Josef Schrammel with two violins, each with a carved portrait head instead of the snail. In 1891 he also worshiped the violinists of the Grinzinger Quartet Steher and Reisinger two instruments. On the basis of orders, violins were delivered to Queen Victoria of England and to King George I. of Greece in 1892. Furthermore, on the occasion of the Vienna International Theater and Music Exhibition in the same year, he personally presented a violin to Emperor Franz Josef I. of Austria that was dedicated to him. In addition to the carved portrait of the emperor, this instrument bears the following inscription on the sides instead of the snail: FROM ALL STRINGS THE MELODY SOUND IN ALL HEARTS. FRANZ JOSEF I. GOT GOD. As the builder of the so-called Schrammel violins and the Emperor violin, Carl Zach will remain known not only in Vienna, but also beyond specialist circles.

Since he employed a large number of employees, from 1896 many instruments in various qualities emerged that cannot be compared with his own work.

Born on October 25, 1812 in Male-Zihany / CSSR, died on January 1, 1892 in Vienna. He is the founder of the Viennese Zach School, which can be followed up to today. Initially working as a miller, he later became an apprentice of the violinmakers Johann Baptist Dvorak and Anton Sitt in Prague. He then worked for Johann Baptist Schweitzer in Budapest and eventually became his business successor around 1853. After 13 years, he sold the violin making workshop. In the meantime he owned his own coffee house, but came to Vienna after various places of residence, including Bucharest in 1866, around 1870. In 1888 he handed over the business to his son Carl Zach at Kärntnerstraße No. 34, in the 1st district of Vienna.

He built his instruments mainly inspired by Stradivari and Guarneri models. His precise work and the good wood and varnish quality of his instruments gave him a very good reputation as a violinmaker, not only in Vienna. At the World Exhibition in Vienna in 1873, he received several medals for the instruments he exhibited. In 1889 he delivered instruments to the Boston Symphony Orchestra. His instruments are in high demand today at home and abroad and are highly valued.